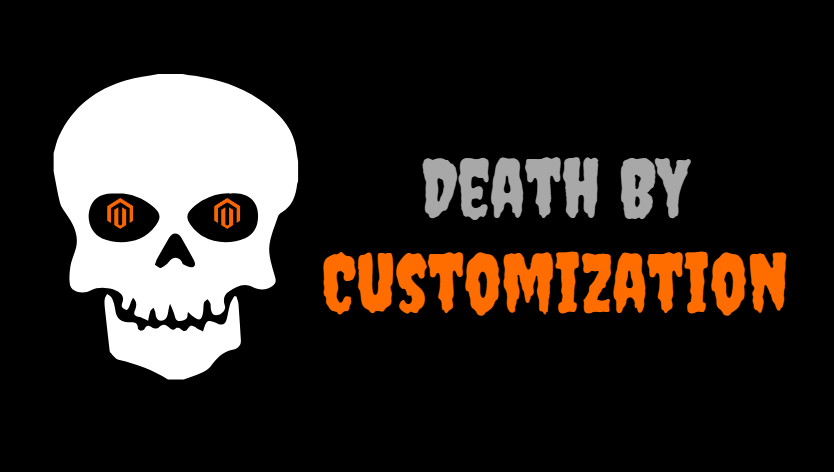 The dream website for many eCommerce merchants contains every feature they can imagine, plus any customizations required to make growing and running their eCommerce business a breeze.

For many retailers, Magento has been that dream. A feature-rich, low-cost, easy-to-customize solution. Unfortunately, we’ve seen that dream morphed into a nightmare for many poor souls who over-extended themselves by adding too many features and customizations to their Magento site.

Upon initial build, it may seem feasible to clear up the outstanding bugs of an overbuilt site. But as time goes on, issues can pile on top of one another, potentially leading to your entire site going down and many customers being lost (along with the corresponding sales revenue).

That question has a unique answer for every individual business. There is a certain limit to the number of features and customization that can reasonably be created and maintained by any organization. Companies with great budgets and technical acumen can support incredibly complex software (ie. Google and Amazon). But every company must understand what their limits are and how to operate and grow within the confines of their capabilities. First, let’s discuss what kind of issues over-customization can cause:

I’m sure we’ve spooked you by now. So, how do you prevent these unfortunate consequences? Ultimately, we have to take a look at your company size, revenue, and resources.

Smaller Merchants – Is Magento Right for You?

With the onset of Magento 2, we’ve received migration quote requests from many smaller merchants running Magento 1 Community Edition that would be much better served by instead using a software as a service (SaaS) platform like BigCommerce or Shopify. These companies may have been lured into running Magento because of its many features and flexibility, but the cost to maintain Magento is way beyond what these SMBs are capable of. Instead of Magento working as an engine for growth, it becomes a liability, forcing these merchants to spend precious resources they should be dedicating to marketing on upgrades, patches, and support. In addition to the maintenance costs being (commonly) too steep, these merchants lack the resources in-house to properly administer Magento which further lowers their ROI.

In our opinion, it is usually best for small to midsize merchants with less than $5 million in annual online sales to try and limit their use of custom modules for Magento to 10 or fewer. While this number is somewhat arbitrary, it is a good benchmark for merchants wishing to mitigate the risk of getting into more customization than they can safely handle.

Most merchants selling less than $1 million online will likely be best served by a SaaS solution like Shopify or BigCommerce. If these merchants using a Saas are looking to safely mitigate any risk of performance issues or compatibility bugs, they should likely look to leverage existing templated themes and fewer than 5 apps.

For larger merchants needing a large number of complex features on their website, we recommend ensuring that their customizations are loosely coupled and operating by interfacing with the Magento API to minimize performance and code compatibility issues. For example, a merchant wishing to solve complex shipping quote requirements can mitigate the risk of over-customization by using the 3rd party app ShipperHQ. ShipperHQ is a SaaS solution that integrates to Magento via a small bit of extension code and APIs.  Hence the app is very loosely coupled and thus has minimal risk of causing code conflicts or performance degradation.

Customization Doesn’t Have to be Scary

Customization can become overbearing, but it doesn’t have to. Don’t fear Magento extensions — but don’t trust them blindly either. Not all extensions are created equal. As long as you follow these guidelines and are strict about having a senior developer vet and test extensions before using, you can proceed with caution. As always, if you have any questions about this or are in over your head with customizations, call us today to speak with a Magento Developer.