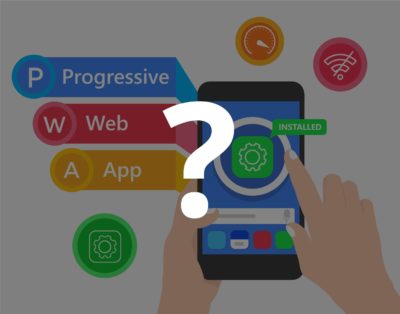 At InteractOne we’ve been singing the praises of progressive web apps, or PWAs, and the many advantages they bring to eCommerce websites of all shapes and sizes. PWAs are websites that provide users with the look and feel of a native app, straight from a mobile browser.

As we’ve outlined before, PWAs offer a number of benefits, whether you’re running a web store for a pharmaceutical brand or another kind of eCommerce website. PWAs enable a greater user experience, they can increase conversion rates and overall revenue, and they’re less costly to develop and maintain than a native app.

Because PWAs are not apps, they’re not required to be submitted to the Apple App Store (or the Google Play Store) for approval. This means they don’t fall under the purview of Apple or Google, so they aren’t held up by these stores for their lengthy review periods. It also means they don’t provide traffic or fees to the Apple App Store or Google Play Store.

As CNET points out, “native apps are integral to Apple’s business,” whereas for Google, “keeping people on the web is key.” This suggests that the lack of oversight, control and ability Apple has to profit off PWAs is the reason why they have been imposing increasingly severe limits on them.

“It starts coming down to app store politics and revenue,” Peter Sheldon, Senior Director of Strategy at Magento, told CNET. “If you make web apps as good as [native] apps, where does the app store revenue go?”

Recently, Apple announced that the Safari browser would not support a number of web application programming interfaces—16, to be exact. This included Web Bluetooth, Web NFC, Network Information, Proximity Sensor and Geolocation Sensor, to name just a few (read the rest of the APIs here.) This meant that developers would have an even more uphill battle in creating and implementing powerful web apps.

Apple also announced, via a blog post about enhancements to their Intelligent Tracking Prevention, that they will be “deleting all of a website’s script-writable storage after seven days of Safari use without user interaction on the site.” Some in the industry claim that this sudden change—from no storage limit to a seven-day storage limit—seemed extreme and unnecessary.

What is Apple’s Reasoning for Restricting PWAs?

Apple is limiting PWAs in an effort to discourage their development. They claim that their goal is to protect users’ privacy, as they say the web APIs enable advertisers and data analytics companies to develop scripts that fingerprint people as well as their devices.

User fingerprints are small scripts that are loaded and run in a user’s browser, and are used to measure their responses to websites. Marketers develop user identities based on these unique responses. While this is obviously useful for companies seeking to measure their websites’ engagement and success, this seems to be a point of contention for Apple.

What Can Be Done About It?

Developers have been attempting to come up with various workarounds to some of the challenges they’re being presented with, and some have been sharing their ideas. One wrote that he believes that PWAs can be made to “work without a backend component by storing all data for a given user at the user’s own machine,” therefore getting around Apple’s privacy concerns.

Apple has yet to make a statement about whether or not they will allow push notifications for iOS, and this is causing friction. At least one petition has been started to call for push notifications to be implemented. Developers are calling for the company to at least communicate their intentions on this matter, so that they can then create a native app or move forward in some other way.

To their credit, Apple is intent on providing fast, secure and private browsing. But they are attempting to do so at the expense of developers’ freedom to create more user-friendly online experiences. It comes down to a conflict of interest, and unfortunately one side has more power than the other. Only time will tell whether compromises will be made.