CRO Testing is Expensive, but Worth It 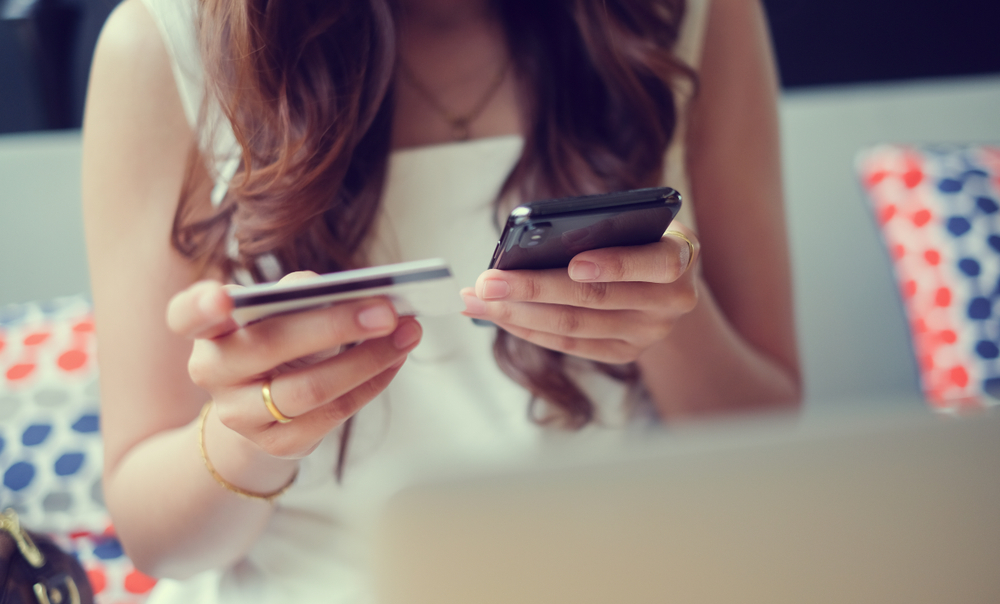 Conversion Rate Optimization. No doubt you’ve heard of it by now but if you’re still not running tests on your website in order to improve your conversion rate… Why not?

The number one reason we hear as to why clients don’t invest in conversion rate optimization is, you guessed it, the cost. If this is you, keep reading!

Unfortunately, they’re right. On-site optimization testing comes with a myriad of costs – the platform, the labor, and not to mention – what if your test fails and you lose money in real time?

But while there are a number of risks and costs that come with optimization testing, for many companies, CRO is the single best thing you can do to increase your revenue.

So yes, CRO testing is expensive. But it is so worth it.

Instead of spending money on new traffic (which only lasts as long as you pay for it), investing in CRO means you’re investing to increase the entire website’s conversion rate, thus doing what is necessary to get more out of each visitor. In addition, if you’re doing it correctly, Conversion Rate Optimization will even improve your search engine efforts! 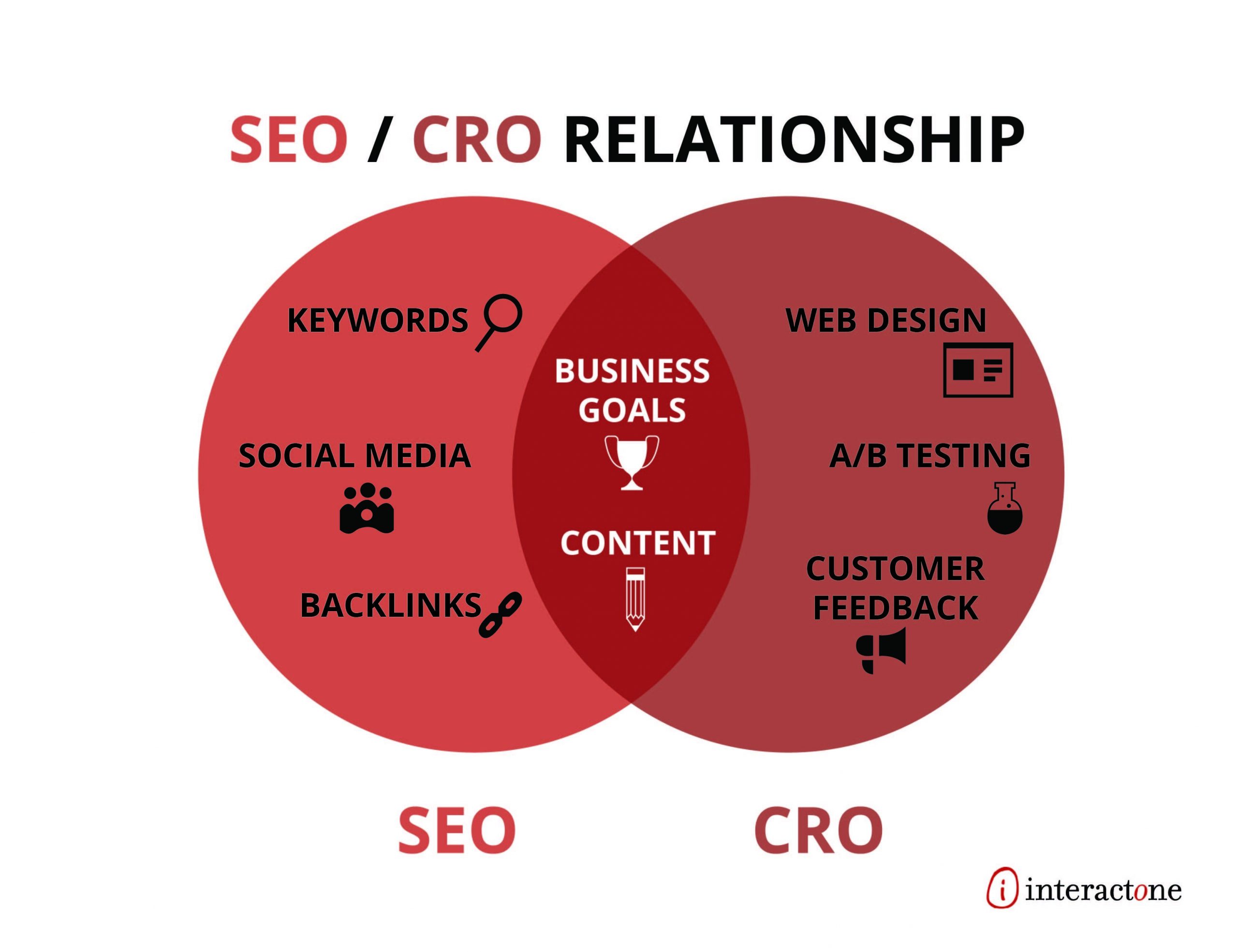 It’s known that lower bounce rates and higher engagement rates lead to higher organic search rankings. These are metrics that you can measure alongside conversion rate improvements as you are testing. But the SEO/CRO connection is a conversation for another time. Stay tuned for an additional blog post on that topic!

The best part of CRO is that it’s directly measurable. SEO is hard to measure as most benefits come about after a few months and often don’t have a super clear cause and effect, but when you are running on-site optimization tests, you get actual real-time insights as to what changes are moving the needle.

If that isn’t enough to convince you, a survey across almost 3,000 CRO users showed an average of 223% return on investment. Of course, results will differ for every company, but if you have a strategic CRO team working for you, it is possible  to surpass those results.

Here’s a real example of one of our clients:

Last year, we suggested five A/B test templates to our client, who decided to run all of them. These A/B tests were not chosen based on data or any specific needs of our client – it was completely random.

For context, here are quick descriptions of the five A/B tests we chose:

Two of the tests were focused on the product page and moving the location of the SKU: 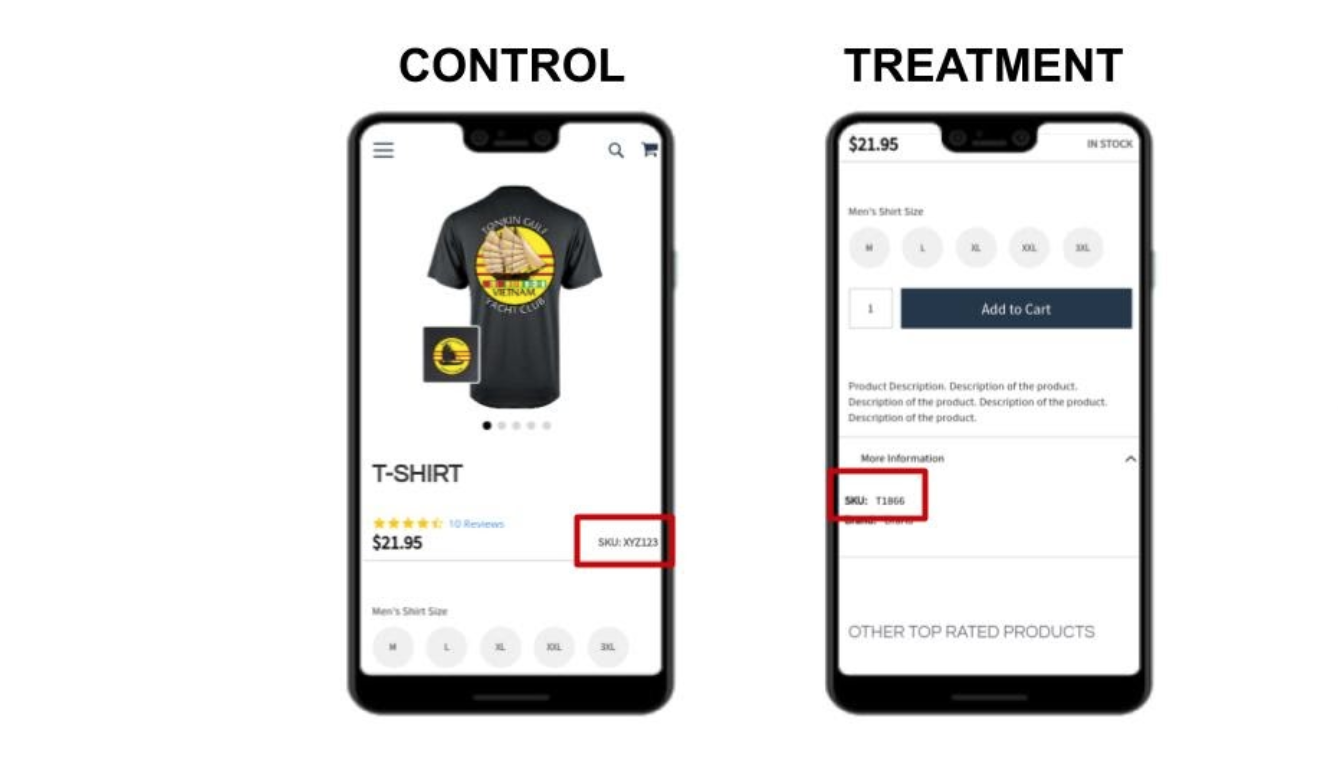 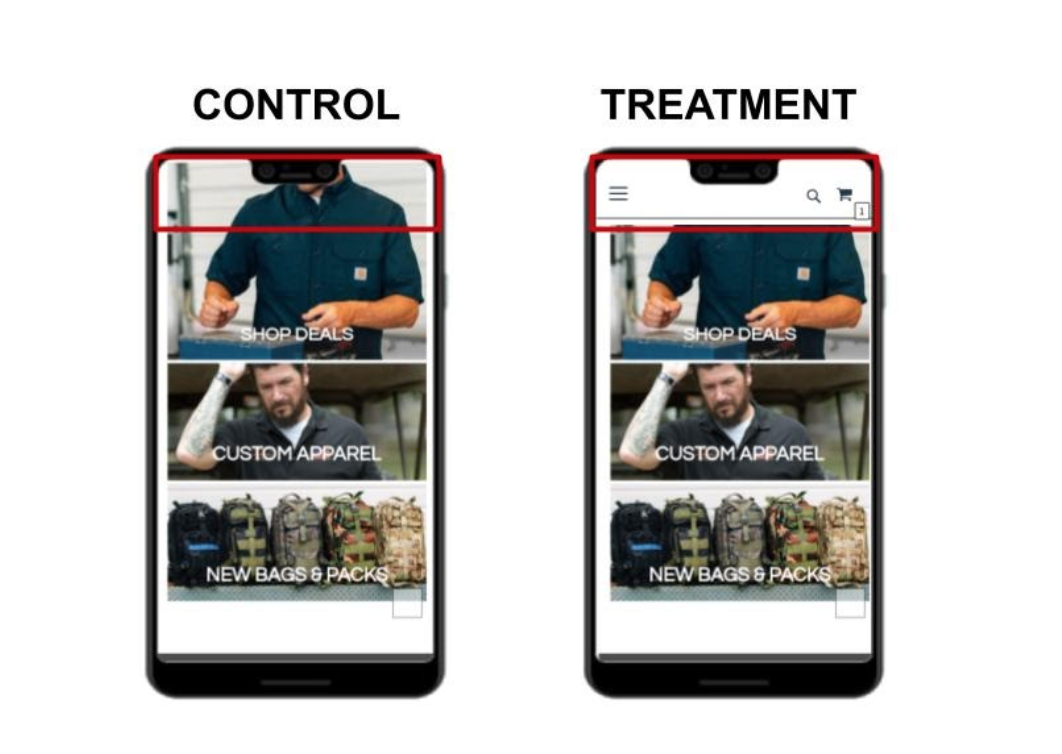 When a visitor to the Treatment page had at least one item in the cart, the total cart value would display as a bubble on the cart icon in the upper right hand corner. 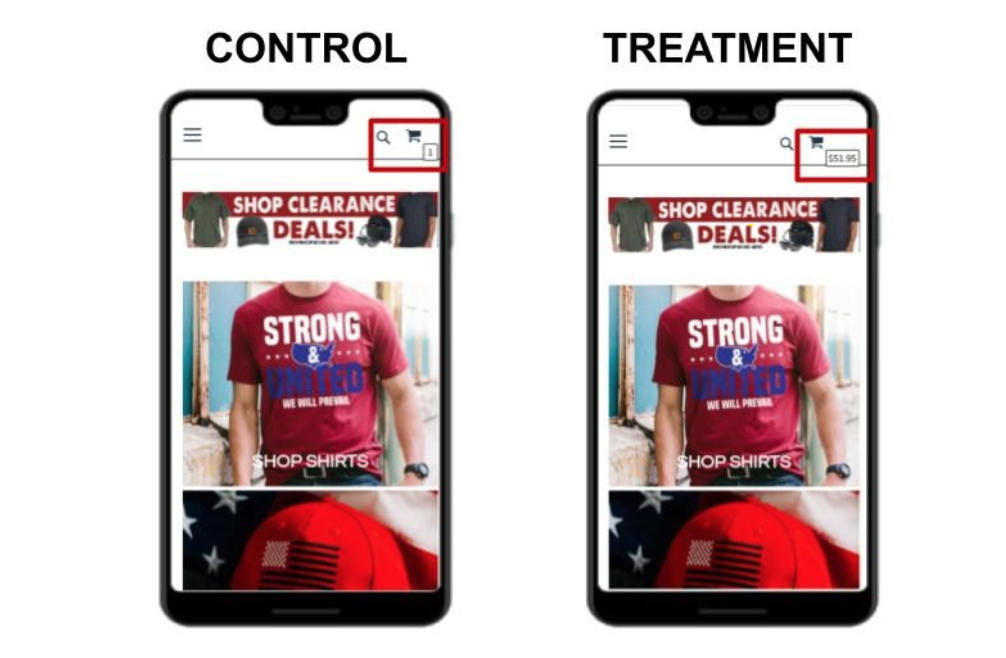 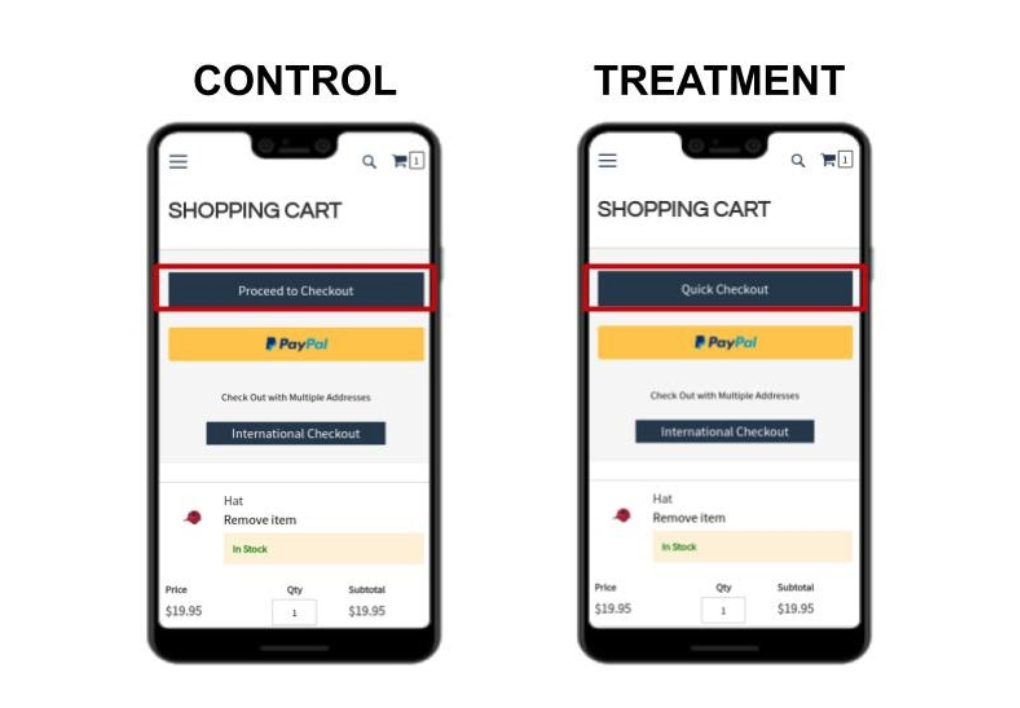 Unsurprisingly, two of the tests were immediately identified as losers, and traffic was stopped on them within the first two weeks (lost about $1,500 in revenue – yikes!).

However, the other three tests looked promising enough to continue and these ran through the remainder of the 60 day trial. Of the final three, Move SKU and Quick Checkout proved to be extremely positive, each touting a statistical significance of 98% increase in conversion rate. The Cart Total was a wash as we saw no distinct statistical change in performance in either direction.

We were thrilled – when testing at random, a 50/50 chance is about as good as you can hope for.

As mentioned before, the best part about CRO testing is that you can directly measure successes and losses in real time. Just as we could see how much we lost, we can see how much extra revenue our client made during a test.

If you’re floored by those numbers, remember that this was only the additional revenue generated during the two month trial period. The beauty of CRO testing is that by the end of the test, you have ideally identified a better-performing version of your website. This new and improved website has a higher conversion rate and revenue per visitor (and whatever other metrics you measured), so the winnings keep on coming!

With over $20,000 additional revenue generated during the testing period, and more than double that amount projected in each of the coming months, it’s no surprise that our client made the right call to invest in their future conversion rate optimization efforts.

While the above is absolutely a success story, remember, those tests were chosen at random. They could have all failed! Once our client officially hired InteractOne to help them with strategy, the testing success rate continued to improve.

A/B testing can be vital to the success of your eCommerce site. The idea of letting your visitors decide what the website should look like/how it should function through real-world use is a phenomenal opportunity. And when you employ strategic data analysis to come up with informed hypotheses that drive your testing decisions, it is absolutely incredible what you can uncover.

When we run CRO tests for our clients, it’s not just the test that we’re running. It’s a complete analysis of the website’s data so our team has the best understanding of the site and its customers before we start the tests. Our hypotheses are driven by extensive health checks on the website, where we combine user experience (UX) testing with behavioral and quantitative analyses. This, combined with our past experiences in optimization, helps us identify areas on the site that have the greatest potential for improvement.

In these audits and analyses, it’s often normal to incorporate more than one test per page (also know as Multivariate Testing (MVT). This is not a problem and can be quite powerful, as long as appropriate measurement systems are in place!

If you thought the revenue lifts for the A/B tests were high, wait until you see how powerful an MVT can be. But we’ll get to that in another post.

Optimization strategy is the most important part of testing. You can test all the templates in the world, but if you are not being strategic, you’re just as likely to lose money as you are to improve revenue performance. This is what you pay for when you pay for CRO – not just the tools, but the people who know what to test so that you maximize your opportunity to increase revenue WHILE testing – not just after. If you thought the revenue lifts for the A/B tests were high, wait until you see how powerful an MVT can be. But we’ll get to that in another post.

Don’t get the wrong idea – random A/B testing can still accomplish very  much. Thomas Edison has famously touted “I have not failed. I’ve just found 10,000 ways that won’t work.”

However, if you employ a little strategy and reason, you’ll be that much more effective. Nikolai Tesla was quoted, referring to Thomas Edison “If he had a needle to find in a haystack, he would not stop to reason where it was most likely to be, but would proceed at once with the feverish diligence of a bee, to examine straw after straw until he found the object of his search. … Just a little theory and calculation would have saved him ninety percent of his labor.”

At InteractOne, we’re all for a little theory and calculation.

To learn more about CRO, A/B Testing and our unique and measured approach to improving eCommerce, contact us today.

Connect with one of our experts today to discuss your ERP Challenges!