How Effective Are Online Ads

In a world where marketers have taken strongly to digital advertising, we aren’t abandoning traditional media. TV still takes the largest share of ad dollars in the US, and that percentage of the total dollars spent isn’t slipping. But with the measurability inherent in online ads, confidence in their efficacy is generally high.

Consumers appear to like seeing ads in traditional media better than on newer digital devices. Asked about their preferred venue for ads, 45% said they liked seeing them in their favorite print magazine and 23% on their favorite TV show, compared to just 11% who chose favorite websites, 3% who chose social media and 2% who liked to see ads in digital magazines. 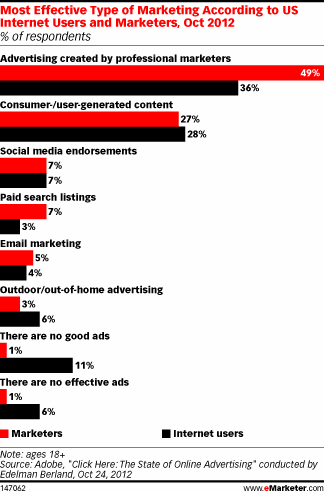 Marketers, and the consumers they are trying to reach, disagree on the effectiveness of a wide variety of ad types, according to the survey. While both groups thought the best ads were those created by professional marketers, nearly half of marketers said this, compared with just 36% of Internet users. There is a large disagreement about the effectiveness of paid search ads (touted by marketers, played down by web users) and outdoor advertising (the reverse). Internet users were also much more likely to say there were no good or effective ads.

What did consumers like? Nearly three-quarters thought ads should “tell a unique story, not just try to sell,” while about two-thirds said videos and user product reviews were good and that in-store experiences were more important than online ones.

The message for marketers  appears mixed, it’s not exactly news that consumers don’t love to see advertising, but with the holiday’s approaching keep in mind, according to Google, 76% of people say they’ve searched online before making a holiday purchase”… do you want to miss out on an opportunity to serve your ads to those Internet users? Regardless of what they think about being advertised too, compelling and engaging marketing can turn even the most ardent anti-marketing Internet user into a customer.